We hold these truths to be self-evident, that all men are created equal, that they are endowed by their Creator with certain unalienable Rights, that among these are Life, Liberty and the pursuit of Happiness - Declaration of Independence

In honor of the 4th of July, a brief overview of my fourth great-grandfather, Daniel Howel (or Howell), veteran of Virginia Militia of Revolutionary War.

Daniel settled around Botetourt County, Virginia. He appears to have married at least twice, his last marriage to Frances Clarke. They had at least one child, a daughter, Christiane Howell who married Luther T. Aldrich.

Daniel served in the Revolutionary War off and on through the years 1776-1781 in the Virginia Militia. According to Daniel's Revolutionary War Pension file, he first served under the command of Capt. Walter Crockett and General Christy (or Christian) for a 5 or 6 month tour against the Indians of the Cherokee Nation in 1776.

His second tour was three to four months in 1776-1777 against the Cherokee under Capt. Harstone and Col. Martin. Daniel was at the treaty signed with the Cherokee at the Long Islands of Holston in Tennessee.

Daniel served a 30 day tour as a ranger under the command of Capt. Joshua Wilson and Lt. William Hangate in 1778.

Daniel's last tour was for one month under Col. Walter Crockett [most likely meant Hugh Crockett] and Capt. Eason in the Virginia Militia, marching into North Carolina, participating in the skirmish at Reedy Fork of the Haw River prior to the Battle of Guilford Court. He was discharged and returned to Virginia. 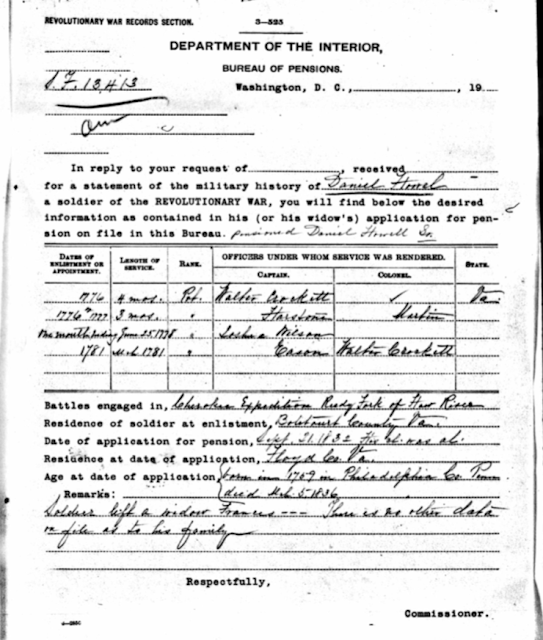 1783 On rolls in Captain Eason's Company

1795-1799 Family moved to Montgomery Co. Virginia, though the move may have been shifting county lines.

1831 Montgomery Co. was divided. The Howells ended up in Floyd Co.

He applied for a pension for Revolutionary War service on 21 Sep 1832.

Signature of Daniel Howel in 1832

From the Revolutionary War Pension for Daniel Howell, he was married to a woman named Frances who was looking for the remainder of the pension.

In the pension file, there is a letter form 1855 to John Howell in Vega, Henry Co, Iowa, which is next to Jefferson County where Frances Clarke Bartlett Howell Williams died. The letter indicates:

Dr. Sir; - Yours of the 23th ult. has been received. After a good long search I succeeded in finding the Pension papers of your father Daniel Howell - who drew a pension as a soldier in the Rev. War, while he lived in Jacksonville, Floyd Co. Va. From these papers it appears that his widow, Francis Howell, is entitled to 5 years half pay pension, commencing Feby 3. 1853- and she will be entitled to draw the amount due her form that time up to the 4th of March next on complying with the enclosed circular. Your truly, Bernhart Hann.


This suggests that John is helping his "mother" Francis and that they are in Iowa where Christians Howell and Luther Aldrich lived after their marriage. Frances Clarke Bartlett Howell Williams died and was buried in Jefferson County, Iowa.


Posted by Bill Barrett at 4:41 PM No comments:

Generally writing up research and analysis of work to get input and suggestions from the broader genealogy community.